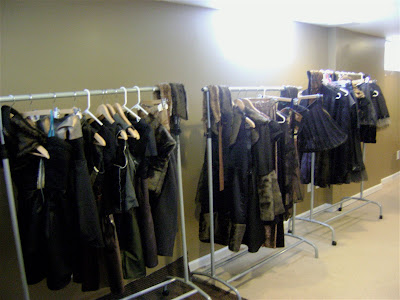 Well, I have finished my first collection. It feels pretty amazing and surreal, actually. I wanted to write about the inspiration behind it. People ask me about inspiration, and I have a pretty tough time I think, eloquently talking about my inspirations. I'm not good with words sometime when I'm speaking and get nervous. I can't even imagine if I was interviewed. I'd be like, "Well, it's...inspired by...stuff... and...."

The first piece of this collection was started while I was still in school at FIT. My senior piece was something I had worked very hard on, but also was the first time I had really worked with leather as a textile, and thus spawned my love affair. I somehow knew that this piece would be a part of a full collection. I could see the collection in my head already, and this was back in April of 09. Below is that piece. It was supposed to be "inspired by Versace" and I think I made it work, but overall it's my design and like I said before, really in my head, it was always more of one piece in a 20 piece collection of my own inspiration. It was only fitting that my first piece be one that I made while actually still in New York. 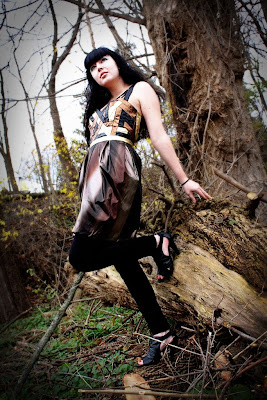 After I graduated and started preparing to move back to Detroit. I started to shop for my fabrics for this collection, and think about where I wanted to go with it. It had to be a fall collection, and it had to feature leather and deep rich dark colors and textiles. I included leathers - the metallics were bought in NYC, but all of the black leather I later scrounged up from entirely found and reused materials. Reclamed old jackets, discarded or donated; belts, pants; furniture coverings, etc. And cut it all up to make into jackets, dresses, belts and more. I have this weird theory that objects retain some part of their former life, deep inside them - not in the weirdo way that it sounds, but just, subtly. I liked using materials that had been used before for an entirely different purpose. Sometimes resale shops can seem so sad, all those discarded items. I wanted to give them another life, and make them beautiful in a new way. The other fabrics include silk taffeta, faux fur, tulle, crinoline, satin and lace, just to name a few. I also hand dyed and hand painted some of the fabrics. I made all the belts and the oversized neck pieces. 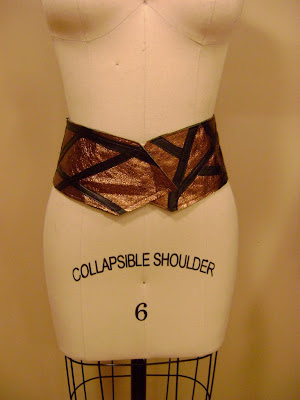 We drove from New York to Detroit in a van filled with the last two years of my life in New York, and I began to think about transitions from one place to another and leaving yourself here and there. And so it began.

This collection is about that feeling of holy Fing Sh*t when you experience something totally different than anything you've ever done or seen before. It was inspired by my time in New York and things I experienced there, as well as experiencing Theatre Bizarre for the first time, and all those nights throughout my life where I was led by the hand through an unmarked door, which opened up to something I've never seen before. LA, Paris, Switzerland, kind of a love story through my traveling pasts. These clothes tell a story about the people you find behind these doors, who look like no one you've ever seen in daylight. People you want to get to know, but are unsure you ever really can.

I hope to see you all on March 20th. I have worked very, very hard for this day. 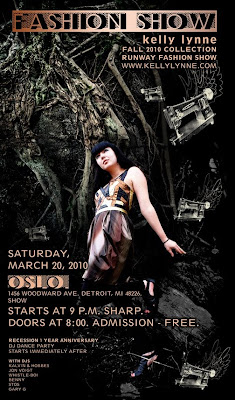 i can't wait! it will be an amazing show, im sure!!