I am in New York this week, and attended Savage Beauty, the Alexander McQueen Tribute exhibit at the Met, on Sunday. I intend to go back again tomorrow morning. It was overwhelming, sad, and devastatingly beautiful. I can't leave New York without seeing it at least twice. 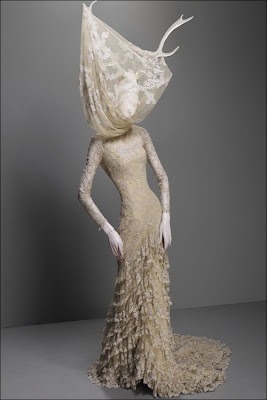 Alexander McQueen, since the moment I first looked at his work - which was the No. 13, spring/summer 1999 collection where Shalom Harlow rotated on a platform in a white muslan dress and robots sprayed her with yellow and black paint. - has long been my favorite artist. I don't even think he should be called a designer - while he is obviously an incredible designer - I think artist fits him better - speaks more volume for what he really has accomplished. He doesn't just make clothes. He makes you think, he makes you feel. Sometimes its bad, and sometimes it's good, and usually it's both.

Anyway, like everyone else in the fashion world, I was obviously devastated when he committed suicide last February. It was a huge loss. But I wasn't completely surprised. His mother had died a few years before, and he was very close to her. In interviews, he constantly referenced "when I am gone", and you could tell he didn't mean when he was 89. 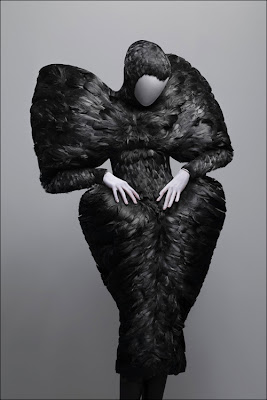 I purchased the book Savage Beauty at the exhibit, and I read something in it that really struck a chord with me. He was talking about the shows, and how they were always the most important thing to him. He never really even cared about selling the collections.

"I need inspiration. I need something to fuel my imagination and the shows are what spur me on, make me excited about what I'm doing. When you start getting into the mindset where this is a business and you've got to bring in money, when you're designing with a buyer in mind, the collection doesn't work. The danger is that you lose the creativity that drives you....I want people to see that this is what fashion is about. This is what we're here for. This is why we're unique. There isnt anyone doing anything like I do. It's taken me fifteen years to come up with a concept as a designer, to become fully aware that what I'm doing is personal to me. I don't think I always do it for the people in the audience. I do it for the people who see the pictures in the press afterwards, in newspapers and in magazines. I design the shows as stills and I think that if you look at those stills they tell the whole story." 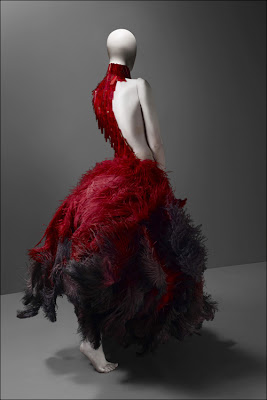 Reading this passage in the book made me feel extremely comforted. I felt like I finally found someone I could really relate to in this way. The shows are what I love most about being a designer. I make no money off of them - I don't even charge a thing for people to come watch. I just make a collection to tell a story. To be completely honest, I don't even care about selling it. I don't care about reproducing it in 4 different sizes. I don't get off from seeing it in a store. I am not a business woman, as much as people tell me I need to be, I just can't do it. Sometimes, and definitely in the case of certain pieces, I don't even want to sell it. I just want to put on a show, and tell my story. Alexander McQueen may be gone, but his work will continue to live on - through his past collections, and the amazing translation of his work and his vision from here on out executed by the incredibly talented Sarah Burton, creative director for the McQueen house. And I am just grateful for everything he has done for people like me - encouraging us that we in no way, need to follow any fashion rules in order to be great designers. 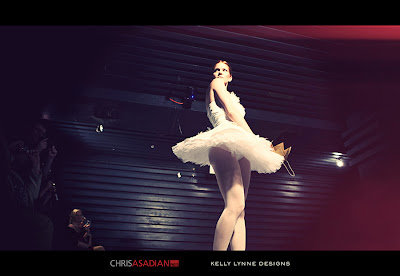 This photo is part of a set taken by Chris Asadian at my 2011 Fashion Show. See the rest here.
Posted by woooo at Wednesday, June 08, 2011